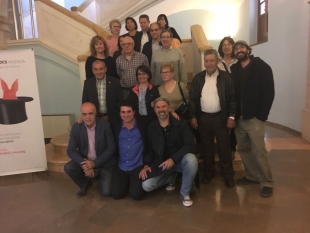 Submitted 4 years 5 months ago by editor.

​‘The Subversives’, the feature documentary by Miles Roston, produced by Carles Pastor of Gaia Audiovisuals/Loto Films and Jenny Lundstrom of Ethan Films, had its national premiere at Valencia International Documentary Film Festival between April 30th and May 2nd.

‘The Subversives’ tells the little known story of UN Director of Human Rights Theo van Boven (1977-1982) who investigates the disappearances by military dictatorships of South America and worldwide, eventually confronts the US and the UN Secretary General, and changes the face of human rights protection worldwide.  Featuring van Boven as well as figures such as Judge Baltasar Garzón, it also details disappearances under Spain’s Franco, who inspired dictators such as Pinochet in Chile. The film also follows a Valencian woman in her search for the truth about her father’s disappearance under Franco.   Utilising rare archive and filmed in Argentina, Chile, Spain, Netherlands, Switzerland and New York, it features emotional and intimate portraits and testimony of survivors as well as evocative and eerie new sequences of torture centres and mass graves.

Having presold to Spain, the Netherlands and Ireland, the film has also been licensed to Juno Pictures for a theatrical release in the US and Canada in 2018.  "The Subversives is that rare film that both illuminates 20th century history while reminding us that the past is never truly behind us, is never fully resolved and shapes our future. We must never forget the long tradition of dictatorships and fascism, which this film testifies against,” says Elizabeth Sheldon, president of Juno Pictures.

The film was made with the support from:
Valencia Institute of Culture, TV L1 (Limburg), TV A’ Punt (Valencia), Foundation for Media and Democracy, The Dutch Foreign Ministry of Affairs, Human Rights in the Picture